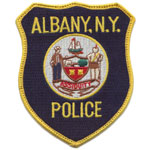 He was exposed to toxic chemicals while working in the department's forensic lab. He medically retired in 1997 as a result of the exposure and his condition continued to worsen until he passed away on April 4th, 2014.

Detective Mayville had served with the Albany Police Department for 26 years. He is survived by his wife.

Detective Kenneth Wilcox was killed in an automobile accident on I-90, at approximately 2:45 am, while conducting an investigation.

His unmarked vehicle struck a guardrail, crossed all of the travel lanes of the highway, and struck a concrete divider on the opposite side.

He was transported to a local hospital where he died a short time later.

Detective Wilcox had served with the Albany Police Department for 19 years. He is survived by his 13-year-old daughter and parents.

During the chase, the suspect turned around and opened fire, striking Lieutenant
Finn three times. One of the rounds was stopped by his vest, one struck him
in the leg, and the third entered his torso between two panels of the vest.
The officer was able to return fire and struck the suspect in the chest several
times, wounding him. Lieutenant Finn was transported to Albany Medical Center
Hospital where he remained in critical condition until his death 6 weeks later.

The suspect was originally charged with attempted murder, but will face revised
charges as a result of Lieutenant Finn's death.

The killer pleaded guilty to a 10-count indictment, including two counts of
first degree murder. On August 18th, 2004, he was sentenced to life in prison
with no possibility of parole.

Lieutenant Finn had served with the Albany Police Department for 13 years.
He is survived by his wife and two daughters.

Sergeant Michael McNeil was shot and killed while questioning a member of a motorcycle
gang. Sergeant McNeil was driving a police matron home when he witnessed a car
travel through a red light. The vehicle matched the description of a car used
in an armed robbery in the next town.

After stopping the vehicle, Sergeant McNeil noticed a discrepancy with the
registration so he ordered the occupants of the car to follow him back to his
station. He brought the driver inside to question him. When he went back outside
to question the passengers he found they had escaped.

The suspect escaped but was captured later in the morning in a neighboring
city. The suspect was out on $50,000 bail for an assault in Connecticut and
was also wanted for a separate murder. He was convicted of Sergeant McNeil's
murder and sentenced to 25 years to life in prison. He died in prison while
serving the sentence.

Sergeant McNeil had served with the agency for 14 years. He was survived by
his wife, daughter, three sons and two brothers. One of brothers also served
as an Albany police officer.

The officers attempted to move away from the door but the suspect fired her
rifle. The bullet grazed one of the assisting officers in the back of the head
and struck Officer Stevens in the neck. Officer Stevens was transported to a
local hospital where he succumbed to his wounds later in the afternoon.

The suspect surrendered to the police and she was charged in the murder of Officer
Stevens. The suspect was found not guilty by reason of insanity.

Police Officer Stevens served seven years with the Albany Police Department
and is survived by his wife and son.

Sergeant McAvoy was shot and killed after responding to a push in robbery.

When Sergeant McAvoy arrived a citizen informed him that a man was inside the
house with a shotgun and there was a woman and children being held hostage.
Sergeant McAvoy left his revolver holstered and entered the house with only
a flashlight in hand so not to endanger the children. When Sergeant McAvoy entered
the house the suspect grabbed him sat him in a kitchen chair in front of the
kids, and shot him in the chest with a shotgun. The suspect then kicked Sgt.
McAvoy, stole the officer's badge, identification and revolver, shot the officer
again in the chest, then picked up both spent shotgun shells.

A back-up officer arrived and the kids motioned with their heads for the back-up
officer not to enter the house. As the back-up summoned assistance from the
police radio in his unit, the suspect escaped through the rear yards to his
car parked at State Street and North Pine Street. The massive ensuing manhunt
failed to capture the suspect.

Sergeant McAvoy had been with the agency for 15 years and was survived by his
wife and two sons.

Officer Castle was killed when he was struck by a 40-ton road grader while directing traffic.

Officer Castle had been with the agency for 11 years and was survived by his wife and two daughters.

Officer Robinson is survived by his wife, two sons, parents and a brother.

Chief Fitzpatrick was shot and killed by a detective following a dispute. The detective was arrested and sentenced to 20 years in prison.

Chief Fitzpatrick had served with the agency for 20 years. He was survived by his wife, two sons and two daughters.

Leave a Reflection on ODMP
1 2 Next »