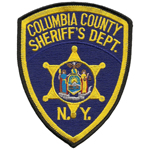 Deputy Sheriff Bernard Roberts died from complications as a result of contracting COVID-19 in the line of duty.

Deputy Roberts had served with the Columbia County Sheriff's Office for 18 years. He is survived by his wife and six children.

Sheriff Cornelius Hogeboom was shot and killed while serving a writ of ejectment. He was ambushed and shot by a group of men who were disguised as Indians.

Then suspects were arrested and charged with Sheriff Hogeboom's murder but all were acquitted.

Sheriff Hogeboom had served with the Columbia County Sheriff's Office for two years. He was survived by his wife.