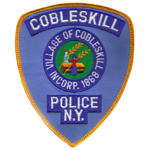 Constable Wilson was shot and killed by a gang of burglars who passed through the town of Cobleskill.

Constable Wilson surprised the four suspects at the corner of West Main Street and Union Street as they were attempting to rob a bank. All four were eventually apprehended.