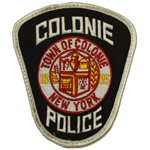 Patrolman Donald Wilkins was struck and killed by a vehicle while investigating a previous accident on Albany-Schenectady Road (modern day Central Avenue) at Highland Avenue.

He was taking photographs of the accident scene when he was struck and suffered severe injuries. He died as the result of his injuries the following day. The driver of the car that struck him was charged with operating at a dangerous speed.

Patrolman Wilkins had served with the Colonie Police Department for two years. He was survived by his wife, two daughters, mother, and and two siblings.