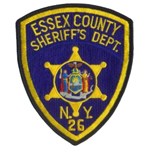 Deputy Eric Loiselle was struck and killed by a tractor trailer while conducting a traffic stop on I-87 in the town of Moriah at 1:00 am.

He was speaking with the driver of the vehicle he had stopped when the tractor trailer veered onto the shoulder, struck his patrol car, and then the vehicle he had pulled over. Deputy Loiselle attempted to jump to safety but was killed.

The driver of the tractor trailer was arrested and charged with reckless driving, unsafe lane change, speeding, and several other traffic violations. On October 3rd, 2006, he pleaded guilty to the misdemeanors of reckless driving, keeping a false logbook, driving on the shoulder of the road, failure to reduce speed for an emergency vehicle, and moving from a lane unsafely.

Deputy Loiselle had served with the agency for 4 years. He is survived by his wife, young son, mother, grandmother, and a sister.

Deputy Earl Torrence was beaten and strangled to death with a rope by two prisoners in the county jail during an escape attempt. The prisoners had lured Deputy Torrence, the lone jailer on duty, into the cell after the lights had been turned off for the night and then beat him and garroted him.

Deputy Torrence's body was found in the morning with the rope tied around his neck.

The two prisoners escaped from the jail. One suspect was captured the next day in Keene Valley near Elizabethtown. The other suspect was taken into custody a few days later.