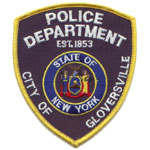 Officer Charles Dunham was shot and killed and another officer was kidnapped when they entered a mans home to investigate a complaint made against him by his ex-wife. As they attempted to arrest the man he gained control of Officer Dunham's service revolver, shot him, and then forced the other officer to drive him five miles to Johnstown. The suspect released the officer and sped away in his patrol car with police in pursuit. The suspect was captured after he crashed the patrol car in a ditch on Route 30-A.

The suspect, charged with first degree murder, was acquitted by a jury April 8, 1966.

Officer Dunham was survived by his wife and daughter.

Officer Elmer Rumrill succumbed to injuries sustained five weeks earlier when a large overhead door struck him in the head. The accident occurred when he noticed that the factory door was open during his beat. As he attempted to close it, the door came down quickly and struck him on the back of his head.

He was preparing to return to duty after five weeks when he suddenly lapsed into a coma and passed away.

Officer Rumrill had served with the agency for 5 years. He was survived by his wife and three children.

The suspect was captured on Mountain Lake Road after he was shot and seriously wounded by a posse member a few hours later.