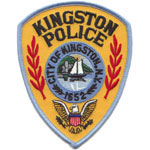 Patrolman Lawrence succumbed to a stab wound sustained the previous day while attempting to arrest a drunk man who was creating a disturbance. During the arrest the suspect attempted to flee and Patrolman Lawrence fired a warning shot at him.

The suspect was convicted of Patrolman Lawrence's murder and executed in the electric chair on July 22, 1920.

Patrolman John Boyd succumbed to injuries sustained one week earlier when the trolley he was riding on was struck by a West Shore Railroad train at the Broadway Crossing.

Patrolman Boyd was on duty and was riding in the front platform with the motorman when the trolley and train collided. He was thrown onto the train's cowcatcher. He was taken to Kingston City Hospital where he remained until passing away.

Two other passengers were also killed in the crash.

Patrolman Boyd had served with the Kingston Police Department for 12 years. He was survived by his wife.