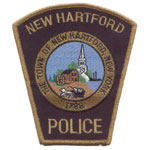 Officer Joseph Corr was shot and killed following a vehicle pursuit of two men who had just robbed a jewelry store.

Part of a four-man crew, the suspects committed the robbery on Commercial Drive in the town of New Hartford and were escaping when Officer Corr arrived on the scene. Officer Corr and other officers pursued two of the suspects in their vehicle for approximately three miles along Route 5 until it crashed into a service station gas pump. Both suspects exited the vehicle and began to flee on foot.

Three officers chased one suspect who was apprehended. Officer Corr pursued the second suspect. During the foot pursuit, the suspect opened fire and killed Officer Corr. He then carjacked a vehicle and fled.

The suspect was tracked to a house in Chester City, Pennsylvania. As members of the United States Marshals Service, Chester City Police Department, Pennsylvania State Police, and the Delaware County Sheriff's Department surrounded the house, the suspect opened fire. He was shot and killed in an exchange of gunfire with the officers in which a United States Deputy Marshal was wounded.

The apprehended suspect was charged with second-degree murder. In January 2007 he was convicted of murder and 18 counts of robbery and was subsequently sentenced to 300 years in prison. In July 2009 three additional suspects were charged federally with conspiracy, robbery, and murder. In July 2011 all three were convicted and sentenced to life in prison with no parole.

In May 2008 State Route 840 was renamed the Officer Joseph D. Corr Memorial Highway.

Officer Corr had served with the New Hartford Police Department for 6 years. He is survived by his wife, infant daughter, parents and two sisters.