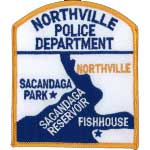 Police Officer Bob Johnson was struck and killed by a vehicle on Route 30, south of High Rock Road, at approximately 9:50 pm.

He had just gotten off duty and was driving home when he encountered the crash in which a deer was struck by another vehicle. Officer Johnson had retrieved his service weapon and was walking along the shoulder on the opposite side of the road to dispatch the deer when he was struck by a second vehicle.

He was transported to Nathan Littauer Hospital where he succumbed to his injuries shortly after midnight.