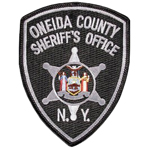 Deputy Sheriff Kurt Wyman was shot and killed during a standoff following a domestic disturbance in Knoxboro.

Officers responded to the scene of a domestic disturbance at approximately 9:00 pm when the man barricaded himself in his garage with a shotgun. Negotiators were attempting to get the man to surrender at approximately 2:00 am. Deputy Wyman was approaching the man with his taser when the subject opened fire, killing him.

The suspect shot in the exchange of gunfire and taken into custody.

Deputy Wyman was a U.S. Marine Corps veteran and had served with the Oneida County Sheriff's Department for four years. He is survived by his expectant wife and 18-month-old son. His wife went into labor upon being informed of Deputy Wyman's death and gave birth to his daughter.

Deputy Sheriff Charles Kammerlohr was shot and killed in Utica when he and another deputy stopped a truck occupied by two men suspected of hauling bootleg liquor.

As he stepped on the running board of the truck he was met with a fusillade of shots. Before falling he returned fire seriously wounding both suspects.