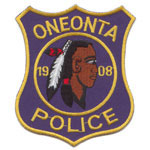 Patrolman Monahan was killed in an automobile accident while returning to Oneonta from Sidney Center, New York, after an attempt to serve an arrest warrant. He was traveling eastbound on State Route 7 when another car approached him from the opposite direction. Patrolman Monahan pulled to the right of the road and the car dropped off of the pavement. As he attempted to pull back onto the pavement the vehicle crossed the roadway and struck the guard rail. He was thrown from the vehicle and sustained fatal head injuries.

Patrolman Monahan had served with the Oneonta Police Department for 1.5 years and had previously served with the Delaware and Hudson Railroad Police. He was survived by his wife and 7-year-old daughter.