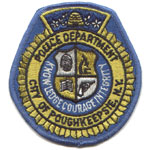 Detective John Falcone was shot and killed after responding to a shots fired call on Main Street.

He was just over a block away when he received the call and when he arrived at the scene he encountered a man holding a 3-year-old child and waving a gun. The suspect fled, still holding the child, with Officer Falcone in pursuit.

Detective Falcone was able to rescue the child from the man and handed the child to a bystander before engaging in a struggle with the suspect as other officers arrived at the scene. During the struggle Officer Falcone was fatally shot in the head before the man committed suicide.

The subject's wife was found in a nearby car with a fatal gunshot wound to the head.

Detective Falcone had served with the Poughkeepsie Police Department for 18 years. He is survived by his parents.

Detective Falcone was posthumously promoted to Detective by the Poughkeepsie Chief of Police.

Officer Raymond Cleveland suffered a fatal heart attack while escorting a woman to jail from a local tavern. The woman was able to slip out of her handcuffs and kicked Officer Cleveland. He collapsed while trying to subdue the woman.

Officer Cleveland had served with the agency for 27 years.

Officer Otto Albertson suffocated while at the scene of a fire.