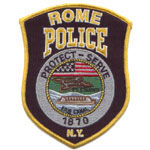 Officer Phillip McDonald was struck and killed by a fleeing truck following a vehicle pursuit of a burglary suspect. The pursuit ended 25 miles away in Herkimer. Officer McDonald, one of several officers in pursuit, got past the truck a considerable distance. He got out of his patrol car, drew his revolver, and pointed it at the approaching driver. Forseeing arrest the driver jumped from the drivers seat and the driverless truck struck Officer McDonald.

The suspect was captured minutes later. He was convicted of manslaughter and sentenced to prison.

Officer McDonald had served with the agency for 19 years. He was survived by his wife and two children.