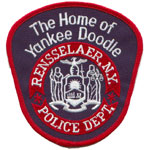 Sergeant Rabe and Detective James Stevens were shot and fatally wounded while responding to a bank robbery committed by the Scarnici Gang from New York City. The two officers were shot as the gang attempted to come out of the bank. Detective Stevens died at the scene and Sergeant Rabe succumbed to his wounds six years later.

The leader of the gang was eventually caught in Poughkeepsie, New York, and sentenced to death.

Sergeant Rabe was survived by his wife and two children.

Two of the suspects were shot and killed and several others fled and were never apprehended.

The leader of the gang was eventually caught in Poughkeepsie, New York, and sentenced to death. He was executed on June 27, 1935.

Officer Barney was killed in a motorcycle accident while on duty.