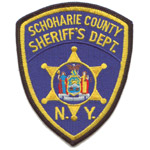 Sheriff Steadman succumbed to a gunshot wound sustained the previous day while arresting a man for car theft. The suspect shot Sheriff Steadman as he searched the suspect. The man had concealed a handgun in his sock and it was missed when other officers initially had searched him.

The suspect was convicted of Sheriff Steadman's murder and executed on July 23, 1931.

Sheriff Steadman had been with the agency for 6 months. He was survived by his wife and three children.

Deputy Veley was shot and killed after responding to the sounds of an explosion. He was on patrol when he heard the explosion and discovered that several men had bombed the safe at the post office. As he investigated the scene he was shot in the abdomen. He was able to walk to a local doctor's office but succumbed to the wound the following day. One suspect was apprehended.

Deputy Veley was survived by his wife and child.

Deputy Huddleston had been with the Schoharie County Sheriff's Department for two years. He was survived by his wife.