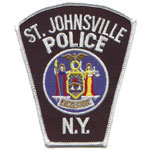 Patrolman Hill was killed when he was struck by an automobile.

Patrolman Hill was on foot patrol on Main Street at about 4:30 am, near Beekman's store (near the intersection of Bridge Street and Main) when he was struck hard by a car which continued westward without stopping.

Three men saw a big car, perhaps green or blue, leaving the scene, but did not witness the actual hit and run. The car carried no banners or outside luggage, indicating it was probably owned locally. They saw more than one person, maybe three, in the front seat and maybe more in the back seat.

The three carried the fallen night officer to a doctors office where he died at 7:30 pm that evening without regaining consciousness. An autopsy revealed a fractured skull and a broken neck.