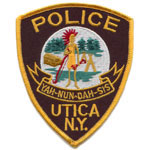 Officer Thomas Lindsey was shot and killed while conducting a
traffic stop.

While on patrol, at approximately 9:20 pm, Officer Lindsey
stopped a vehicle at the corner of Neilson Street and Eagle
Street after observing the vehicle commit a traffic violation.
Officer Lindsey was shot by a suspect as he approached the
vehicle.

The primary suspect was arrested shortly after the incident on
a bench warrant. He was charged with murdering Officer
Lindsey in June 2007 after an investigation determined that he
had planned to murder a police officer. On May 29, 2008, he
was convicted of first degree murder and sentenced to life
without parole.

Officer Lindsey was a US Marine Corps veteran and had
served with the Utica Police Department for five years. He is
survived by his parents and three siblings.

Sergeant Gerald Boehlert died after suffering a heart attack while attempting to break up a fight at a night club.

Sergeant Boehlert had served with the agency for 22 years. He is survived by his wife, two children, and grandson.

Patrolman Orlonzo Cellamare succumbed to injuries sustained several days earlier when his patrol car was struck by another vehicle. He and his partner were responding to backup another officer at a burglary call when the accident occurred.

The driver of the vehicle that struck the patrol car was charged with running a red light but the charges were later dropped.

Patrolman William Chapman was killed in an automobile accident on Genesee Street while responding to a call at St. Elizabeth's Hospital. Another vehicle turned onto Genesee Street from Arnold Street, causing Patrolman Chapman to swerve to avoid a collision. Patrolman Chapman's patrol car then struck a building where he sustained serious internal injuries. He was transported to a local hospital where he died approximately one hour later.

Patrolman Chapman had served with the agency for 15 years. He is survived by his wife and two young daughters.

Sergeant Michael Brophy died from injuries sustained when he was struck by a streetcar 10 days earlier while directing traffic. After the injury Sergeant Brophy was taken to a local hospital where he contracted pneumonia and gangrene, resulting in the amputation of both of his feet.

Sergeant Brophy had served with the Utica Police Department for 20 years. He was survived by his wife and three children.

Patrolman Creedon succumbed to a gunshot wound sustained one week earlier when he interrupted a burglary in progress while walking his beat. The burglary was taking place at a sporting goods store on Blandina Street. Although mortally wounded, Patrolman Creedon walked several blocks back to the police station and notified other officers of the incident. He was taken to St. Elizabeth's Hospital where he died 8 days later.

Two suspects were arrested and convicted Patrolman Creedon's murder. One of the men was executed in the electric chair at Sing Sing Prison on December 19, 1916. The second suspect was sentenced to life.

Patrolman Creedon had served with the Utica Police Department for 7 years and was survived by his parents, brother, and three sisters.