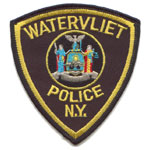 On April 20, 1973 Patrolman Don Kimmey responded to a call for a disturbance in the City. During a struggle while attempting to affect an arrest, Officer Kimmey was struck in the head and chest area. Officer Kimmey suffered from lingering inexplicable chest pain for several months for which he sought treatment. Ultimately, on September 13, 1973 Officer Kimmey was undergoing a surgical procedure for his chest injuries and died during surgery.

Officer Kimmey served the Watervliet Police Department from 1963 to his death on September 13, 1973. For sometime Officer Kimmey's cause of death was in question and not attributed to line of duty activity. After much correspondence, consult and investigation by the Kimmey family, it has been medically determined that Officer Kimmey did succumb to injuries as a result of a line of duty performance.

On May 21, 2008, the Kimmey family was honored with the recognition of Officer Kimmey's ultimate sacrifice and his inclusion on the State of New York Police Officer Memorial at the State Remembrance Ceremony

Patrolman Garrahan succumbed to gunshot wounds sustained one month earlier while transporting a prisoner to jail in the side car of his motorcycle. The prisoner grabbed Patrolman Garrahan's service revolver from its holster and shot him several times.

Patrolman Garrahan was single and had served with the agency for 6 years.

Chief Corbett succumbed to gunshot wounds sustained two days earlier while attempting to arrest a man for armed robbery. The suspect and Chief Corbett were wounded during the shootout.

Chief Corbett had served with the agency for over 22 years. He was survived by his wife and four children.